Keller Williams Realty was founded in 1983 in Austin, Texas by Realtors Gary Keller and Joe Williams. A fast-growing real estate wonder, within two years it become the dominant residential realtor company in Austin, with over 70 agents. A few years later, they began using the profit-sharing model to survive and thrive during the recession. By 1993, the company had begun to franchise their business model, becoming the 6th largest real estate agency in the nation. They have since branched out into commercial realty and continue to offer their profit-sharing business model all over North America.

Keller Williams Capital Partners opened in August 2002, in Columbus, Ohio, almost three years after Sue Lusk-Gleich began to travel to Austin to learn about the Keller-Williams business model.  Sue spent time learning about this new company in-depth before she decided to bring it back to her Central Ohio realty marketplace.

While some local agents and brokers thought Sue was crazy to think that the Austin realty powerhouse would do well transplanted to Columbus, Sue approached a core group of other high performing agents and brokers in the capital city area.  Shy explained why the Keller Williams philosophy was an idea whose time had come.  Brian Kemp, Joann LaBuda, Mark LaBuda, Joe Jackson, Eric Ransome, and Paula Linnahan all joined Sue to become Owner-Investors in Keller Williams Capital Partners Realty.

Sue Lusk-Gleich was initially inspired by the agent education and new agent mentoring that Gary Keller believed in and the profit sharing opportunity for all agents. She was searching for a business model that worked better for both agents and clients. Sue found exactly that in Keller Williams, where they emphasize fair compensation, fair expenses, and a work/life balance that puts faith and family before business.

In a traditional realty business model, the agents must promote the franchise brand first but they still compete directly with other agents within the same office. Agents must show outward brand loyalty, while their own office charges them retail prices for simple things such as office supplies, rent, while fueling competition against their own office-mates. The extra cost and effort demanded from agents by this model mean less focus on the client. Sue was looking for a better way to do business for everyone.

The Keller Williams business model is founded on the idea that agents who are better educated, have more support, and pay only their fair share of the overhead are going to have more time, energy, and motivation to give clients the best possible realty transaction experience. Sue and her colleagues appreciated that Keller Williams’s financial guidelines also prohibit each market center from carrying debt. This means that a significant portion of every dollar of profit is shared with every agent who contributes to building the company. This true profit sharing inspires cooperation between agents within an office or market center. Client satisfaction comes first, as every sale by individual agents means growth and profit for the whole market center. This creates a family atmosphere, where agents are benefiting by working together rather than by engaging in competition. Agents share ideas and knowledge to help each other succeed, and the client is the focus of the transaction. Keller Williams’ model also allows for agents to promote themselves as well as the franchise, leading to higher name recognition and increased sales for the entire market center.

Joe rented the building on West Wilson Bridge Road, while teams quietly visited the Texas franchise headquarters to learn the Keller Williams methods, structure, and model. The extended team would often gather in their new and nearly empty office space, brainstorming and planning the logistics for opening…sitting on folding chairs and even on the floor, mapping out their strategy.

Keller Williams Capital Partners was the first Keller Williams in the state of Ohio, and celebrated the move into their new building on August 1, 2002. They purchased a new building in 2007, which they have already outgrown. They are justly proud of their growth and success. 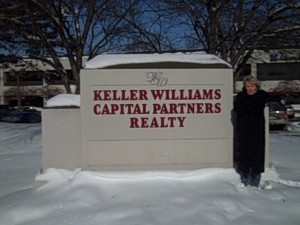 It’s easy to see that Sue Lusk-Gleich was correct in bringing Keller Williams to Ohio, the franchise and model has grown and thrived in Columbus and many other offices have since opened throughout the state. Their ever-growing circle of repeat clients agree!