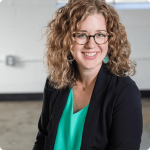 Erin’s background in mortgage lending led her to become a Realtor when she discovered her true passion was the challenge and thrill of putting together the right buyer and seller.

You might be wondering if there’s going to be a housing bubble burst soon in Columbus, Ohio. Don’t worry, you’re not alone, many of our clients are asking the same.

According to many experts, the scenario isn’t nearly as bad as it seems, but we want to present you with different opinions from a variety of experts. Overall, there aren’t any bad omens, but we’ll let you decide for yourselves. Let’s dive in and see what the experts are saying.

Before worrying, weigh all the elements into the equation:

According to Graham Stephan, personal finance enthusiast and real estate investor, with 4 million subscribers on YouTube, there’s no need to worry if we weigh all the elements in the equation, which means, we have to take inflation into account:

“To get a true direction of where the housing market is going you have to take into account inflation. 2.4% increase – 7% inflation = -4.6% return, house(s) prices just fell by 4.6 percent, even though they end up costing more.”

Graham goes on to say that: “Unless you live in a highly speculative market, most likely a price decline is gonna be healthy and might be a good opportunity to buy a house.” and concludes that, “Only buy a house you intend on keeping for at least 7-10 years, that way it doesn’t matter what happens in the short term, you’re gonna be ok.”

It Started: The Housing Market Is Collapsing

When will prices drop?

Andrea Riquier from Forbes Advisor says that there’s no need to worry. You just have to be careful with your budget, “…trying to time the market or predict what might happen next year is not the best home buying strategy. Instead, it’s better to buy based on your budget and needs. However, if you make too many sacrifices just to get a house, you may end up with buyer’s remorse and an expensive albatross you have to offload.”

Bloomberg is more gloomy, and goes on to quote Michel Burry, “…we have not hit bottom yet.” Burry also predicted that consumer spending and market silliness would cause trouble for investors. However, according to our experts, this doesn’t seem to be the case for Columbus, Ohio.

Fortune has featured two opposing headlines, one positive and one negative. Bankrate explains that “most experts and economists agree that the market is not heading for a bubble burst, as it did during the early 2000s. While the housing market certainly remains hot, there are several reasons why experts do not forecast an impending crash. These include continued high demand, low inventory levels (though housing inventory is slowly rising) and much stricter lending standards than were in place then.” Whereas, according to Shiller, “…the U.S. housing market is headed for trouble.”

No bubble burst in sight in Columbus

However, the good news is that, according to Patrick Florence, “Columbus is one of the fastest growing cities in the Midwest, posting net-migration year over year in a region where metropolitan areas are on the decline. Over the last 10 years 90% of Ohio’s population growth took place in Metro-Columbus. Even if market trends continue to decline, Columbus seems like a safe haven for buying and selling real estate.”

Among the 51 metro areas that the bureau estimated to have more than 1 million people in 2020, Columbus ranked 17th in population growth since 2010.

Erin Ogden Oxender, an expert REALTOR based in Columbus Ohio, says that: “Regarding home loans, the difference between now and 15 years ago is the qualification process of Buyers. Underwriters are reviewing income, debt, and assets with a fine-tooth comb. Prior to the recession, they were qualifying anyone with a heartbeat! Consumers are smarter today and now understand how a mortgage works.”

A bubble in Columbus, Ohio?

The good news is that Oxender doesn’t believe that. She goes on to explain, “I do not believe Columbus is in a house bubble, although we may see a slow down or a correction of the market, because of the increase in interest rates.”

Just a jump on the road

Although there are a couple of red flags, the reality is most economists and real estate experts believe there is nothing to worry about. Columbus is unique in that dips in the economy do not impact our housing as deeply as other locations, therefore there shouldn’t be a housing bubble burst. If you’re looking to buy a house in Columbus, Ohio, this is the right time to do it. As long as you stay within your budget, you should be fine.

Considering buying or selling a home?

Let’s start a conversation about it today