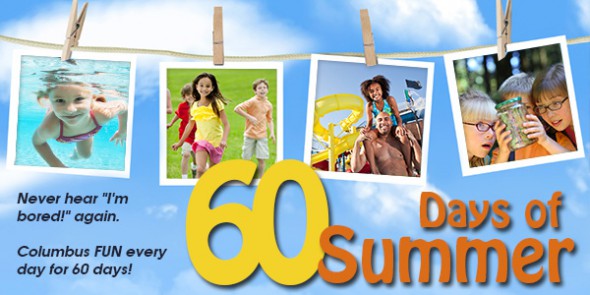 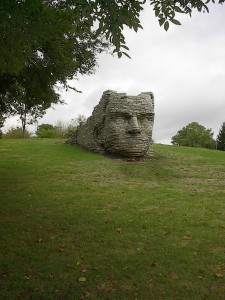 This Dublin City Park features the Leatherlips sculpture, which kids can climb the grassy hill and stand on, while they learn about this great historical leader from Ohio’s past. The rock sculpture of Chief Leatherlips is impressive, and stands next to an outdoor amphitheater that often hosts free concerts, dance, and theatrical performances throughout the summer.

The wooded trail is easy and mostly level, although not fully paved. The river landing offers fishing with a valid Ohio fishing license, and interaction with local fish and waterfowl.

Truly a four-season Dublin City Park, this park boasts one of the area’s most popular sledding hills in winter, weather permitting.

Known throughout Columbus as the Dancing Bunny Park, Ballantrae splash park will create life-long happy memories for parents and little ones.

Crowned with Sophie Ryder’s “Dancing Hares” sculpture made of recycled metals, these happy bunnies preside over a simple splash park with small waterfall that can keep hot and cranky kids happy and splashing for an hour or more. While not much shaded sitting area is available for parents, this one is well worth hauling a picnic blanket and beach umbrella along to enjoy. The kids will thank you! 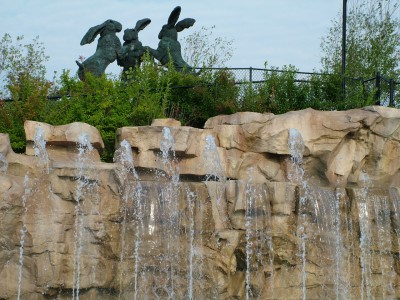 Mostly a park with big fields with a few large rocks, young families are there for the splash park…and they’ll come again and again all summer!

Available year-round, this one is a summer sweetheart for most of us, as the splash park and dancing hares are the main attraction. Enjoy while the sun is out, and make plans to visit again next summer! 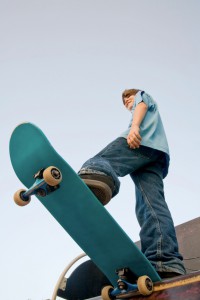 Looking for a free place to take the kids on a rainy summer afternoon? Consider Tuttle Crossing Mall! North and West of Columbus, near Dublin, it’s easily accessible from anywhere on 270. We know, a mall isn’t somewhere you think of as free, but the indoor play space is perfect for little ones, and it doesn’t cost a dime! With soft surface space-themed objects and planet shapes to climb, crawl on and through, and lots of imagination fuel, your kids will love Tuttle Mall’s play space. There’s always a group of kids to play with, too, just like an outdoor playground. The flooring is soft and low-impact, the space shapes are soft and safe for little ones. Parents do need to supervise kids, just as if you were at an outdoor playground.

Come and get familiar with a favorite Central Ohio shopping venue! Adults will enjoy the wide variety of people watching and window shopping, and maybe even some true shopping, while the kids will love the play area. There are even snacks at the food court to refuel your space explorers.

If you’ve been putting off shoe shopping or swimsuit shopping, this play area makes a great reward for good shopping behavior!

(Parents, please note that the play space is closed for cleaning daily from 2:00-2:30pm)

Take a picnic, bring a blanket, and enjoy the weird corn sculpture garden. No, we’re not kidding, it’s a famous Ohio landmark! “Cornhenge” as it’s known far and wide, is great fun for an odd game of hide-and-seek, a summer picnic, and bring your camera for some fun family photos to share with out-of-state relatives, who will get a kick out of the photos! 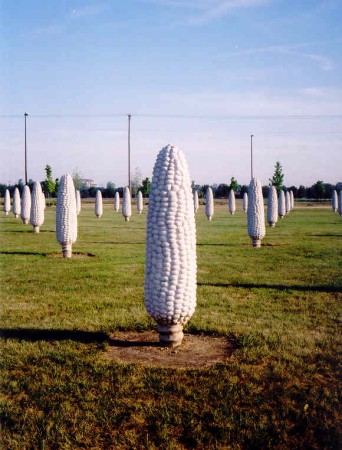 This field of 109 8-foot-tall cement ears of corn sprouting in neat rows is an artistic tribute to Sam Frantz, who owned and farmed this field in the past, creating hybrid strains of corn that are still used today. The land, now called Sam and Eulalia Frantz Park, was donated by Sam to the City of Dublin, Ohio. The field of corn installation is locally famous, and has actually made the RoadsideAmerica.com‘s list of sights to be seen in Central Ohio.

Malcolm Cochran, the artist, completed the field in 1994. Signs about the project and about Mr. Frantz are located next to the row of Osage orange trees on the West side of the park. The variety of corn used as a model is called “Corn Belt Dent Corn,” and the ears are placed so that you cannot see the identical side of another ear from the same vantage point. There’s nothing else in the world like it, and it’s right here in Dublin, Ohio!

Parents please note, there are no bathroom facilities, benches, or water fountains.