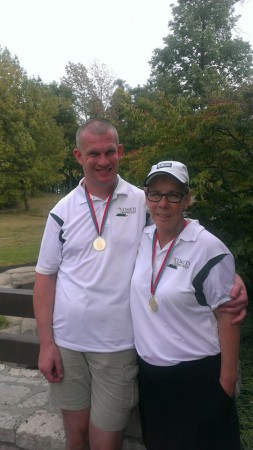 The Special Olympics Unified Sports program is dedicated to promoting social inclusion by teaming athletes with and without intellectual disabilities on the same team to train, play, and compete together. Working together on a shared goal brings people together and helps them to concentrate on their shared interests and similarities.

We are very proud to announce that Sue and Robbie’s team won gold in their Ohio Division Golf Championship!

Sue explains, “I have played and coached Unified Golf for 17 years with the Columbus Public Special Olympics program. This year Robbie became my new partner. He is 41 years old, and a talented golfer.”

Unified Golf means that both team members play with one ball. They alternate tee shots, with one partner taking odd-numbered holes, the other takes even-numbered holes. After the tee shot, the partners alternate shots until they hole out, with the number of shots taken being their joint score.

Sue and Robbie have spent the spring and summer practicing, competing and going to qualifiers in order to qualify to enter the State Tournament in Cincinnati, which was held the 17th and 18th of September at Meadowlinks Golf and Golf Academy. They qualified to participate at the state level and  won gold in their division!

Sue said “On the 18th, we achieved something we had not accomplished during the practice season, and that was in our final round on 9 holes we had 4 pars! That was a first for us, and what a great place to have that achievement!”

Special Olympics Ohio is wonderful way to get involved in our community, and a non-profit worthy of your donations and volunteer time. The Columbus Team is proud of Sue’s involvement as well as her win, and congratulates all the Special Olympics Ohio athletes and their achievements!