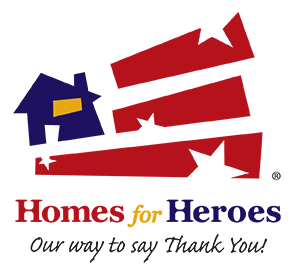 Columbus, OH – January 5, 2015 – Created following the tragic events of September 11, 2001, and bolstered by a shared admiration for the “heroes” of our communities, a group of Minnesota business owners created an innovative network called Homes for Heroes®. With the far reaching power of the internet, what started as a local effort quickly grew and became the nation’s largest hero savings program. Homes for Heroes aim is to help close the gap between the costs of housing for: military personnel, police officers, firefighters, teachers, first responders, and others who serve our community and nation.

Homes for Heroes affiliates with Realtors, mortgage lenders, title companies, attorneys and other service providers who agree to provide significant rebates and discounts to those who serve our nation and its communities every day. It is our way of saying “Thank You” to those that give up so much for us on a daily basis. With over 750 Affiliates in 44 states, their generous Homes for Heroes affiliates have saved heroes more than $3,000,000.00 in buying, selling or refinancing a home, as their way of saying thank you!

Over the years, through Homes for Heroes, many Heroes contacted them to assist with more dire assistance. These calls often far surpassed the scope of the program’s mission. After much thought and desire to help, they formed a charitable 501(c)(3) nonprofit. The Homes for Heroes Foundation assists heroes who demonstrate great need pertaining to housing. In November 2012, the Homes for Heroes Foundation has been chosen by one of the largest, most cutting edge auction firms in the world, Williams and Williams, to be the recipient of proceeds for those who wish to donate their homes to a cause.

More information about the National program can be found at our website: www.HomesForHeroes.com or by calling Sue Lusk-Gleich & The Columbus Team at (614) 888-6100
Homes for Heroes Affiliates in the News

Watch the Homes for Heroes Story:

Watch the Friends of Heroes Story: